Skip to main content
Back to Stories
Hidden Figures | Gender and COVID-19
With household chores up and spending down, this holiday season is set to buck tradition – but that’s not all bad 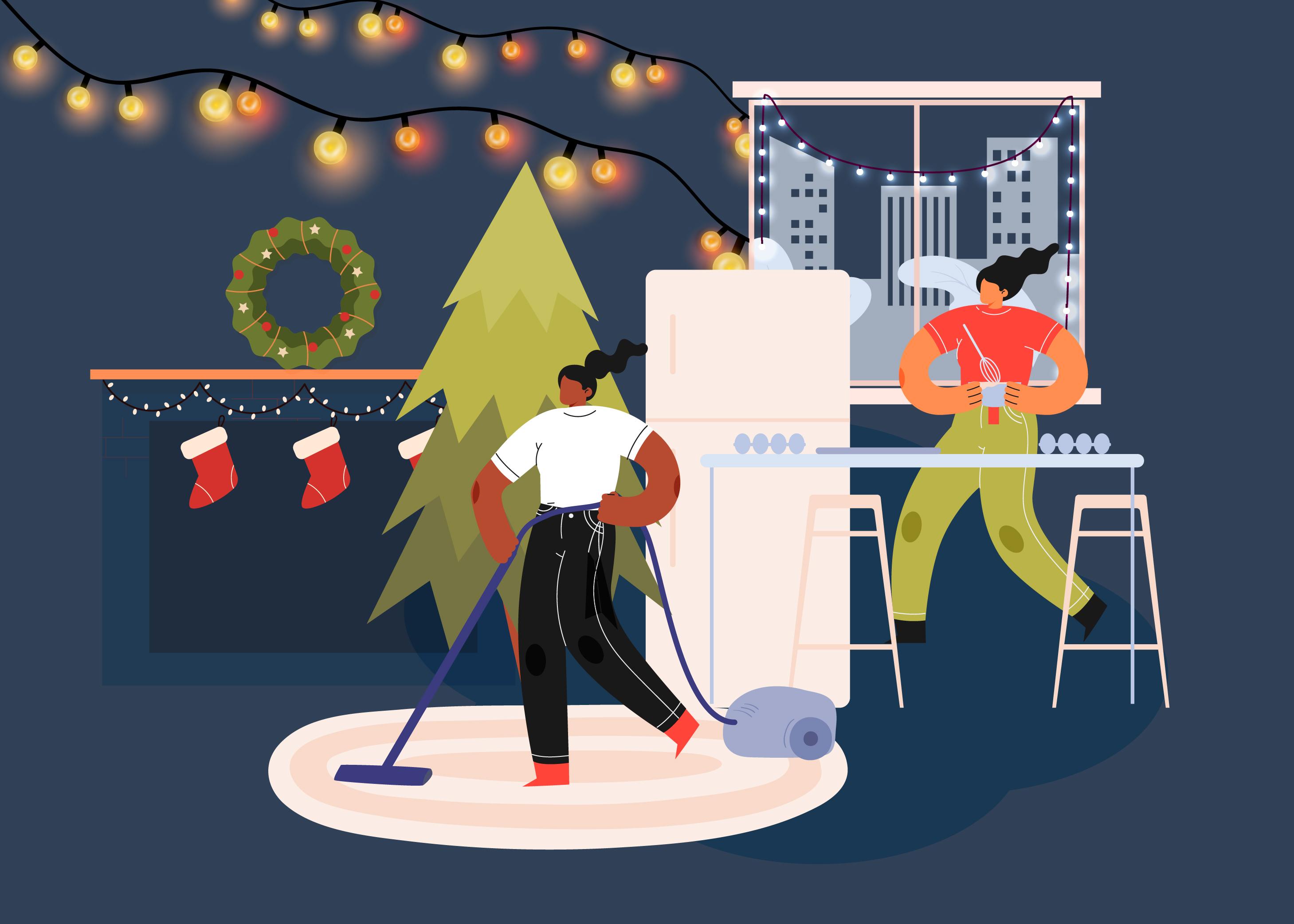 ‘Tis the season of giving

Most people look forward to the holidays as a time to spend with family and friends, attend parties, take year-end vacations, eat too much and – of course – give and receive gifts! But the COVID-19 pandemic is putting a twist in some of those plans.

According to an October 2020 study, Americans were planning to scale back their holiday spending this year, with more women (34%) saying they would spend less compared to men (21%). Not surprising, as greater numbers of women than men have faced job and income losses due to the pandemic. Results of rapid gender assessments in Europe and Central Asia show that more than 15 per cent of women lost their jobs and another 41 per cent saw reduced paid working hours. In Asia and the Pacific, not only did women sustain large drops in income, they were less likely than men to secure support from governments and non-governmental organizations.

Even with pared-down holidays, gift-giving is likely to follow past trends, including gender stereotypes. In an online toy catalogue, of the 12 suggested gifts for girls, half were dolls; for boys, most were action-related toys (think Nerf guns). Even the song, “It’s Beginning to Look a Lot Like Christmas” mentions the hopes of Janice and Jen for dolls that walk and talk while Barney and Ben yearn for pistols.

In line with the higher cost of many consumer products marketed for women, gifts for girls also traditionally cost more than for boys. For example, in the US, one study revealed that a pink scooter costs twice as much as a red one. In South Africa, the price of a toddler helmet is USD 125 when it’s pink, compared to USD 110 when it’s blue. Now that’s a tradition we could do without.

‘Tis the season of family traditions

The holiday season is also steeped in traditions, many involving the time-consuming preparation of signature dishes, often passed down from our (great) grandmothers. With women already doing three times more unpaid domestic work than men globally, holiday meals often fall disproportionately on them. Amid the pandemic, there have been some signs of change, as rapid gender assessment surveys by UN Women overwhelmingly show that women and men have both increased their unpaid domestic workloads. Yet, women are still doing the bulk of household chores. In particular, as families are forced to limit dining out amid the pandemic, nearly two times more women than men (32 versus 18%) are reporting increased time spent on cooking and serving meals.

With children largely at home, either due to lockdowns or school vacations, childcare needs will also be high over the holidays. While women have traditionally been more likely to shoulder this responsibility, UN Women rapid gender assessments show encouraging shifts in men spending more time on childcare. About 3 in 10 men reported spending increased time on caring, teaching and playing with children. Perhaps this could become a new tradition that extends beyond the holidays?

‘Tis the season of new beginnings

For the new year, we often feel the need to make positive changes. We make resolutions and often feel inspired and hopeful. And despite the many downsides of 2020, it has given us hope for gender equality.

Women are far from parity in parliaments (25%) and management positions (28%), yet there are signs of change. Recently, Kamala Harris was elected as the first  female, first Black and first Asian American Vice-President of the United States – smashing a glass ceiling for women in the country and vowing not to be the last. A record number of women, and women of colour, were also elected to the US Congress.

But there's more work to do and we need everyone onboard. The year 2021 will offer several opportunities for the global community to work together and advance women's rights. The Generation Equality Forum will launch a set of concrete, ambitious and transformative actions to achieve immediate and irreversible progress towards gender equality. To this end, Action Coalitions will be part of the journey to unite people around the common goal of gender equality, helping us buck harmful traditions and deliver positive change for women and girls around the world.

Jessamyn O. Encarnacion is the Statistics Specialist for UN Women’s global gender data programme, Women Count. Before joining UN Women, she worked for more than 15 years with the Philippines National Statistical Coordination Board, rising from an understudy in the gender statistics sector in 1997 to Director of the Social Statistics Office in 2013 and capped her national portfolio as interim Assistant National Statistician of the Philippine Statistics Authority during its formative period in 2014–15.

Rea Jean P. Tabaco is a Statistics Research Assistant consultant for the Women Count programme. Prior to joining UN Women, she worked for four years at the Asian Development Bank supporting national statistical systems in the region on survey research and methodologies. She recently served as the Resident Adviser and Project Lead in the implementation of the Household Income and Expenditure Survey 2019–2020 of the Republic of Marshall Islands.

Previous StoryThe COVID-19 pandemic has increased the care burden, but by how much?Next StoryWomen Count in 2020