Skip to main content
Back to Stories
Research highlight | Gender and COVID-19
COVID-19 exposes the harsh realities of gender inequality in slums
People are crowding into cities at record rates; many end up in poorer neighbourhoods with limited services and infrastructure. In this neighbourhood in Medellín, Colombia, most residents come from the countryside, having been displaced by conflict. Some services, like a cable car, have reached them, but they remain outside the more extensive city bus system. Photo: UN Women/Ryan Brown. 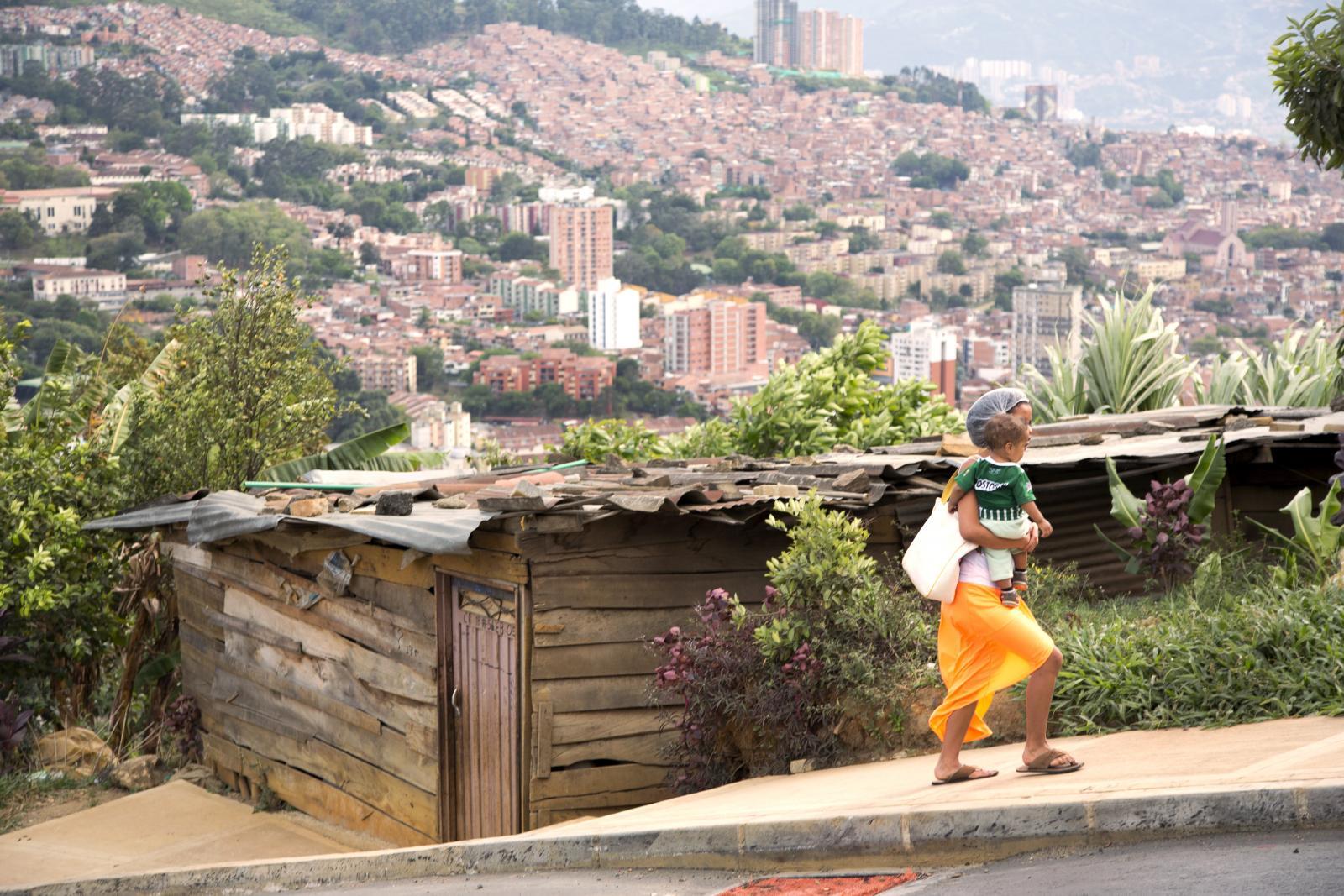 The COVID-19 pandemic is largely concentrated in cities and urban areas, with around 2,600 cities globally reporting at least one case of the disease. While the epicentre of the global health crisis is still Europe and North America, its impact on developing countries may be more devastating, especially for the poorest. The 1 billion+ people living in slums and slum-like settings in developing countries, where population density is high, are those most at-risk and least prepared.

Most countries have responded with shelter-in-place orders, lockdowns and measures to curtail COVID-19’s spread. But slum-dwellers will have a hard time complying, as their overcrowded housing often lacks basic utilities, like water and sanitation. For women and girls who are slum-dwellers, the challenges are even greater as they face increased domestic violence (already being reported) and unpaid care burdens.

Women aged 15 to 49 are overrepresented in urban slums and slum-like settings in 80% of the 59 developing countries analysed in a Spotlight on Goal 11 paper, produced by UN Women and UN-Habitat. In Kibera, Kenya, the world’s fourth-most-populated slum – and where COVID-19 cases are highest in East Africa – there are 116 women for every 100 men. The figure is 120+ women per 100 men in Gabon, Ghana, Guatemala, Haiti and Lesotho. In 61% of the 59 developing countries analysed, more than half of women aged 15–49 live in slums.

The paper shows that women in slums are worse off than their male slum and female non-slum counterparts in access to employment, health facilities, secure housing and education completion. COVID-19 and its aftermath are only expected to worsen such outcomes and increase extreme poverty.

Most women in slums work, but it tends to be low-paid, temporary, strenuous and exploitative, making them more likely to be ‘working poor’ (employed but earning less than $1.90 a day). Many are domestic workers who can’t render services remotely, thereby losing income that enabled them to feed their families. For example, in Brazil, within the first month of the pandemic, 39% of domestic workers had been fired without payment. In India, millions of women casual workers and their families have been stuck in cities without any income or food.

As the pandemic hits low- and middle-income countries, it is critical that the response acknowledge underlying inequalities that place women at even greater risk.

According to WHO COVID-19 prevention guidelines, staying at home, handwashing, maintaining good hygiene and practicing social distancing is advised. However, 1.2 billion urban-dwellers globally lack access to hygiene and handwashing facilities and 2.2 billion urban-dwellers lack access to safely managed sanitation facilities (see Figure 2). In the Kibera slum, residents have one latrine for 50 to 150 people.

Most urban-dwellers without access to safe handwashing and sanitation live in developing countries, where women and girls collect water in 80% of households. They go to crowded community pumps or unprotected water bodies, care for the sick, take young children to latrines and walk long distances in search of firewood – which increases their exposure to the virus through public interaction and being in unhygienic spaces for a prolonged time. Other essential services such as public transportation, on which women rely, are also lacking. There has been a large drop in public transportation services in many global capitals, alongside huge spikes in the cost of the few available.

Source: UN Women calculations based on the WHO/UNICEF Joint Monitoring Programme (JMP) dataset. Accessed 20 April 2020.
Note: Rural – pooled sample and urban – pooled sample is based on the aggregation of data across respective location for 94 countries. Urban and rural location categorizations may not be standardized across countries. These depend on the definition of residence (urban/rural) by national data sources.

In Jakarta, Indonesia, a rapid assessment found that 90% of transgender women surveyed were at high risk of contracting COVID-19 due to their living in cramped slums. In Lebanon, social workers and psychologists are reporting higher rates of gender-based violence in slums, during COVID-19.

Moreover, with schools closed and no access to Internet in most slums, girls will be hit the hardest. Even if remote learning is possible, many girls in these settings bear increased domestic and care responsibilities that limit their remote learning activities.

Ultimately, the worst-affected by the pandemic will be those facing multiple and intersecting deprivations. Women and girls in slums face the double whammy of greater exposure to the virus, given their limited access to hygiene and space, while each day of lost income and education multiplies their vulnerabilities and pushes them further behind.

To avoid heightening already stark social inequalities, policymakers must consider the gender profiles of slums as a first step towards reflecting the needs of women and girls in their strategies. Now, more than ever, we need exemplary solidarity to leave no one behind and prioritize the most marginalized and vulnerable. Emergency response plans must target the urban poor, including slum-dwellers, migrants, the homeless and especially women and girls within these vulnerable groups, who often face even greater challenges with less voice or resources to withstand the impacts.

Robert Ndugwa is the Chief of the Data and Analytics Unit of UN-Habitat, where he leads the agency’s efforts in the collection and dissemination of global urban statistical information and oversees the development of standards and norms for urban statistical activities including the integration of geospatial, statistical and other information. Robert also serves on various boards and represents UN-Habitat at various global statistical forums such as the UN Geospatial Networks, Global Human Settlements Forum, the UN Statistical Commission.