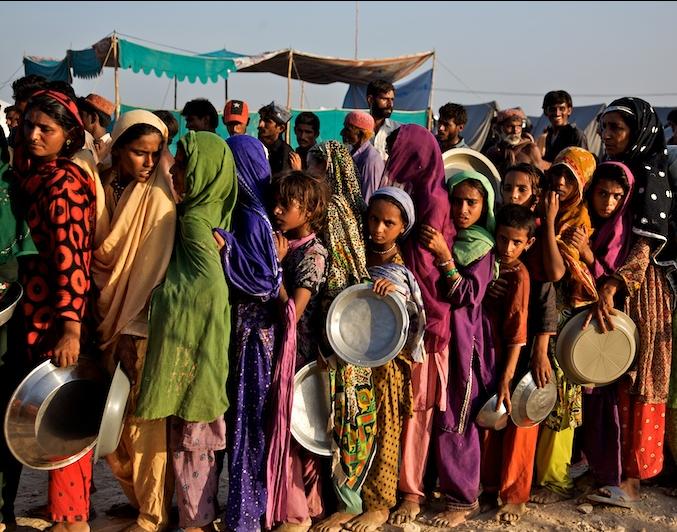 Although we know that women and girls from ethnic minorities are often more likely to face deprivations, we don’t always have information on where they live and how to reach them. From a policy perspective, knowing who are deprived and where they live can help to better target policies and programmes.

The Inequality, Gender and Sustainable Development (IGSD) approach focuses on identifying not only who is most deprived but also where these inequalities are most concentrated spatially. Overlaying new and innovative data such as from Geographic Information System (GIS) with sex-disaggregated social and economic statistics is one example of how the approach can be implemented in practice.

Merging these different data sources can provide insights on women and girls from marginalized groups living in remote or isolated areas, and on women and girls living in other geographic areas with high rates of poverty and deprivation – including those in slums and slum-like settings. Layering other factors where relevant, for example ethnicity, is also essential, particularly in countries that are segregated across ethnic lines.

In Pakistan, mapping these multiple deprivations shows that being in a remote rural area or urban slum is associated with inadequate access to improved water, sanitation facilities and clean fuel, and a scarcity of health facilities. Moreover, it reveals that women and girls from Sindhi, Pashtun, Saraiki and “other” ethnicities face multiple deprivations in individual well-being outcomes and are more likely than Punjabi women and girls and Urdu-speaking women and girls to reside in these heavily deprived settings.

In Federally Administered Tribal Areas (FATA) and the Afghan border province of Khyber Pakhtunkhwa, 99.1 and 72.7% of the female population aged 18–49 are Pashtun women and girls, compared to 16.6% in Pakistan overall (Figure 1a). In both regions, a large share of women and girls face deprivations in three or more dimensions, including access to water, sanitation, fuel and health services (Figure 1b). The opposite pattern is seen for Punjabi women and girls, who are the majority in north-western Pakistan’s Punjab region. Similarly, a large share of Urdu-speaking women and girls reside in south-west Sindh, a part of the country where simultaneous deprivations in access to water, sanitation, fuel and health services are rare.

Studies have shown that mountainous areas across countries tend to be among the least developed, presumably because these areas are remote and difficult to reach. The survey cluster analysis of Pakistan reveals a similar trend. In the remote and mountainous regions of FATA and Balochistan, the majority of women and girls living in these areas face deprivation in at least three dimensions, with only 19% and 20% of survey clusters experiencing zero deprivations in each region, respectively. The deprivations disproportionately affect Pashtun women and women of other ethnic minority groups that are heavily concentrated in these parts of the country. Not having access to basic services and infrastructure leaves women and girls time-poor, since they disproportionately bear the brunt of unpaid care and domestic work.

Figure 1a: Mapping of survey clusters by ethnic group in Pakistan

Figure 1b: Mapping geographic distribution of deprivations in Pakistan

Survey cluster by number of deprivations

Source: Authors’ calculations based on National Institute of Population Studies (NIPS) and ICF International 2017.
Notes: The designations employed and the presentation of material on this map do not imply the expression of any opinion whatsoever on the part of UN Women concerning the legal status of any country, territory, city or area or of its authorities, or concerning the delimitation of its frontiers or boundaries.
Notes 1a: A survey cluster is defined as having an “Ethnic Majority” if 50% or more of people living there are from a specific ethnicity – e.g., in the “Pashtun majority” cluster, Pashtun women and girls make up 50% of more of the female population. The “Other ethnic minority” category refers to clusters where ethnic minorities such as Balochi, Barauhi, Hindko, Shina, etc. combined account for 50% or more of all women aged 18–49 living in the survey cluster. “No ethnic majority” refers to survey clusters where no ethnic group (including “other ethnic minorities” combined) makes up over 50% of households surveyed. ‘Urdu’ is shorthand for Urdu-speaking.
Notes 1b: The simultaneous deprivations presented in the map are based on assessments of the lack of access to basic water, sanitation, availability of clean fuel and distance to health facility as a major reason for not being able to access a health care facility. The threshold to classify a cluster as deprived of access to basic water, sanitation, availability of clean fuel and health facilities, respectively, are 33, 31, 100 and 75% of women in the cluster. These thresholds represent the bottom 20% values for the respective indicator distribution. Each dot on the map is a Demographic and Health Survey cluster. Each cluster represents about 25–30 households.

By triangulating GIS information with demographic data and data on well-being outcomes, it is possible to make visible the effects of multiple and intersecting forms of discrimination. These insights, combined with other sources of information, meaningful social dialogue and concerted policy action, have the potential to move the promise to leave no one behind from rhetoric to reality. From a statistical perspective, this will require significant investment in collecting, disaggregating and analysing data for groups of women and girls who may face multiple and intersecting forms of discrimination.

Disclaimer: The data story is an edited excerpt from Azcona Ginette and Bhatt, Antra. 2021. "How to Undertake an Inequality, Gender and Sustainable Development Analysis: A GIS Approach to Gender Analysis in Pakistan" in Gender Inequalities: GIS Approaches to Gender Analysis. Taylor and Francis. The book chapter builds on the conceptual and empirical work on multi-dimensional deprivation analysis presented in UN Women’s 2018 SDG report. The designations employed and the presentation of material on the maps do not imply the expression of any opinion whatsoever on the part of the authors or their affiliated organizations concerning the legal status of any country, territory, city or area or of its authorities, or concerning the delimitation of its frontiers or boundaries.

Julia Brauchle is a consultant with UN Women’s Research and Data team. Before joining UN Women, she worked at various non-profits, city government agencies and research institutions focused on families and housing policy. She holds a Master in Public Administration from New York University and a degree in Spanish and Business from The University of Edinburgh.