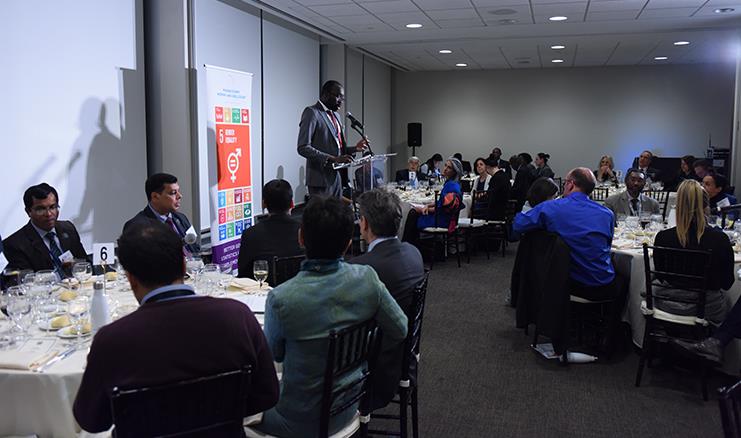 “The SDGs gave us an incredible opportunity and entry point to shine a light on improving the production and use of gender data. We should not squander this opportunity,” said Papa Seck, UN Women’s Chief Statistician. “Showing concrete results of our work is one of the best tools we have at our disposal to ensure that gender data finally occupies its rightful space in the development agenda,” he added, addressing a room of sixty global leaders on gender statistics who came together to reflect on the actions needed to close gender data gaps to fulfil the promise of the SDGs to achieve gender equality by 2030.

On the margins of the 50th Session of the UN Statistical Commission, UN Women hosted a dinner event for partners of Making Every Woman and Girl Count (Women Count), UN Women’s global programme on gender statistics on the theme “Effecting a Radical Shift in Gender Statistics Development: What Roles Can Chief Statisticians Play?” Guests included chief statisticians and senior officials of countries where the Women Count programme is currently implemented as well as heads of statistics departments and officials of several UN and international agencies working to improve gender data in their respective fields.

Following Papa’s opening remarks, Enrique De Alba, Vice President of Mexico’s National Institute of Statistics and Geography (INEGI) explained how gender statistics are central to the work of INEGI. Producing data on women’s unpaid care and domestic work, driving progress on gender statistics at national, regional and global levels, and recently opening the Global Centre of Excellence on Gender Statistics in partnership with UN Women, are all evidence of INEGI’s strong track record on gender statistics. Delina Ibrahimaj, Director-General of Albania’s Institute of Statistics (INSTAT) then spoke about the central role of statistics in decision-making and how, through the Women Count programme, INSTAT has produced the gender data needed to improve decision-making to advance gender equality in Albania. She also indicated that spaces such as the Centre of Excellence can foster better exchange between countries and offer valuable lessons for those that are thinking about implementing similar platforms.

Following the country messages, Emily Courey Pryor, Executive Director of Data2X, moderated a rich and lively discussion during which countries and agencies shared information on key achievements in gender statistics, some fostered through collaboration with the Women Countprogramme, discussed some of the barriers preventing progress where it is needed most, and reflected on actions that can be taken, both individually and collectively, to make significant progress on gender statistics.

Saurendra Nath Chakrabharty, Secretary of the Statistics and Informatics Division at Bangladesh’s Ministry of Planning, announced the signing of the agreement with UN Women to implement Women Count in Bangladesh. He indicated that Bangladesh has conducted several violence against women surveys in the past but with UN Women’s support, they will conduct their first gender-based violence survey. Juan Daniel Oviedo, the new Director General of DANE, Colombia’s national statistical office, talked about the promise that the new partnership with UN Women holds for making progress on gender statistics in Colombia. Zachary Mwangi, the Director General of Kenya National Bureau of Statistics and the Chair of the 50th Session of the UN Statistical Commission, highlighted the need to foster greater collaboration with data users, such as government partners, universities and civil society organizations. Women Count has enabled Kenya to strengthen and build on this engagement with data users and producers.

Participants also raised some key challenges. Chief among them is the coordination of gender statistics within national statistical systems and the need to support national statistical offices to fulfil their coordinating roles. Better donor coordination was highlighted as a necessary condition for this. Several participants also spoke about the lack of statistical standards in the measurement of many areas of gender equality, which impact data quality and harmonization. There has been progress on developing standards for measuring asset ownership, for instance, through the EDGE project, but resource constraints often mean that countries aren’t able to use those standards to produce the necessary data. Human resources are also a persistent challenge, particularly on the need to build statistical capacities, since most statisticians do not have the knowledge and skills required to work on gender data. Improving the production and use of gender data in a sustainable manner will therefore depend greatly on our collective ability to train new generations of statisticians to be gender-sensitive and new generations of gender specialists to be data-literate.

In terms of solutions, participants offered positive notes, with a reminder that although there are large gender data gaps, a lot can be achieved with existing resources, including by making more efficient use of the data that we currently have; training staff in line ministries to produce and use gender data; and as importantly by adopting open data policies. More than coordination, it was suggested that partnerships at all levels will be critical to achieve progress.

The event ended with closing remarks from Shahra Razavi, chief of UN Women’s Research and Data section, who called on the group to act as agents of change for gender statistics. She mentioned that “The SDGs are a golden opportunity to take a big leap in gender data. We cannot get much done without collaboration with our partners.” The high turnout and active discussions around the room among leaders in gender statistics reflected the high-level collective commitment and enthusiasm of countries, regions and the global statistical community to deliver progress on gender statistics.